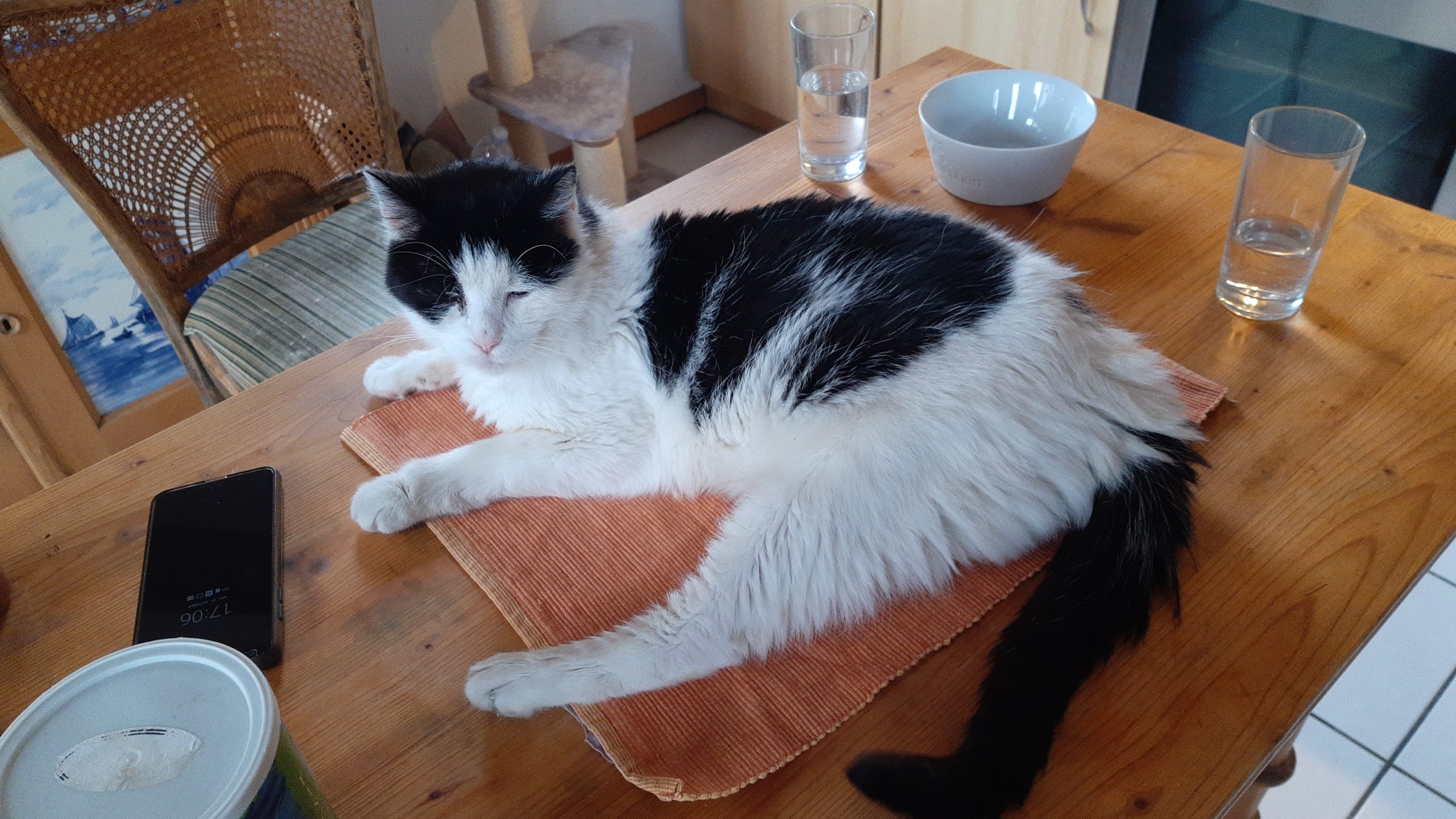 Well, the first weeks… quite exciting. The plan to keep the kitties separated at first didn’t work out at all, because he with his characteristic stubbornness had quickly managed to pry the 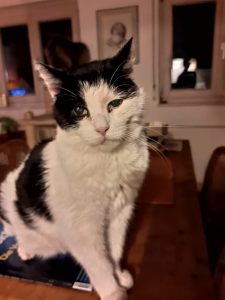 door open. Loudly squawking, like a huge black and white frog he went on to explore the apartment. Not really to Mia’s liking, who quite obviously was confused about the intrepid intruder. So she retreated to the upper level, to my workplace, while he steered straight to the food bowls, complaining all the way long.

Luckily my little floofster is pretty chill. Of course, there was a lot of growling, hissing and even swatting initially, but this was mostly over after a couple of days. They haven’t exactly become best buddies, even after nearly two years, but that’s mainly his fault. Mia is mostly friendly, says hello, gives him a nose boop, and would like to play with him, which he really doesn’t like a lot. Basically, they have created their own separate empires, not a lot of conflict happening, mostly friendly ignoring. Not what I had dreamed of, but after all quite okay, could be much worse, given that she never had been properly socialized.

Anyway… Sir Hubiwas hungry. Very much so. And thirsty. Even more. I had gotten contradictory information in advance, also from the shelter (which didn’t have a lot of experience with a diabetic cat), and so I think he must have been terribly hungry during the first weeks because I gave him of course “normal” rations. He was very thin and scraggly and always came over meowing whenever there was the chance to grab something to eat. 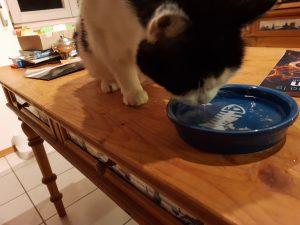 The special dry food was gone quickly and difficult to get. Very expensive of course, and still less than optimal. The target value is usually the so-called NFE-Value: http://www.katzendiabetes.info/futter.php. You should try to get only food with a value below 10 (you can use the data from the food producers to calculate it). Dry food (even the dietic one) usually fails to meet the limit. I have had good results with the dry food from Thrive, especially the PremiumPlus Chicken: https://www.zooplus.de/shop/katzen/katzenfutter_trockenfutter/thrive_katzenfutter/562204

The situation with wet food, which should be the norm in feeding anyway, is much better. E.g. Animonda Integra Protect Diabetes is super, but also many varieties of e.g. Macs. Even a lot of the Aldi food. So you can go much more by price or whatever the little ones actually like.

The first time was very rocky. His digestion was acting up all the time, diarrhea every second day, vomiting every third. In those cases (and just as a general treat) chicken broth and the meat from a soup chicken has come in very useful. Very good for an upset stomach and much favored, especially in the beginning. Sometimes some boiled fish for a change.

Obviously, where a lot goes in a lot is expected to come out. The litter consumption skyrocketed… I use Premiere Multicat XL, which is pretty expensive but doesn’t have to be changed that often. Still a lot of hauling, and I quickly had to get a third (and then a fourth) litterbox. Amazing how much sh*t such a tiny animal can produce.

A little unsteady on the legs…

Compounding the problems was his lack of coordination, especially in the hind legs, caused by advanced diabetic neuropathy. Not yet very dramatic, but already noticeable. He could still jump up the table, but covering up in the litterbox was already more of a perfunctory gesture than an actual effort. And there was always something going outside the box. 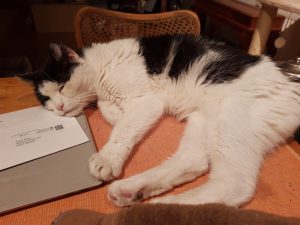 This went on for a couple of weeks, but it became clear that only by dietetic food it was not possible to tackle his diabetes. He did not gain weight, his digestion issues became worse and in general, his quality of life wasn’t very great. Because of his lack of mobility, the hair at his back became matted and tangled up, which I couldn’t get rid of with my tools. Also because he hated to be touched there. Apart from that, he quickly became a real cuddle bug, not a lap cat, but always ready for an ear massage or some scritches under the chin. Quite vocal when he didn’t like something, but in general very nice and relaxed. It was therefore time for a presentation at the vet, and for the next step… 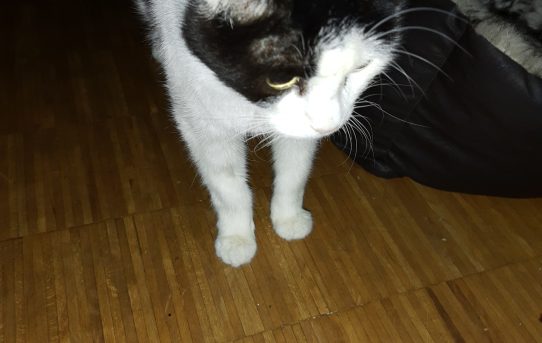 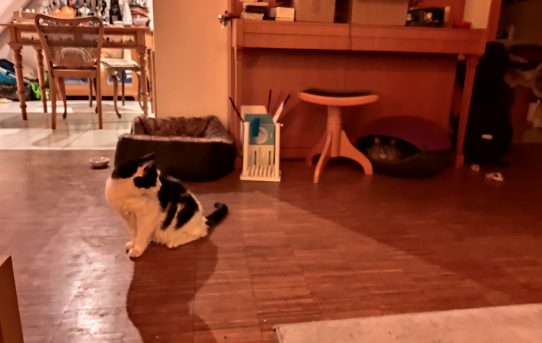 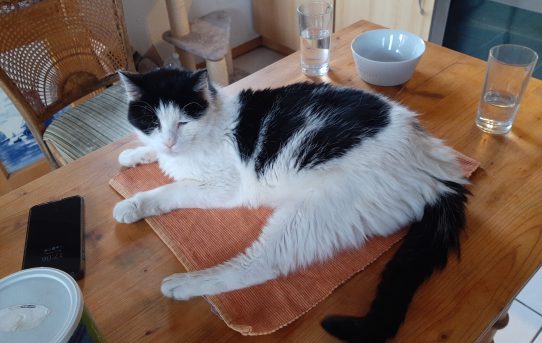 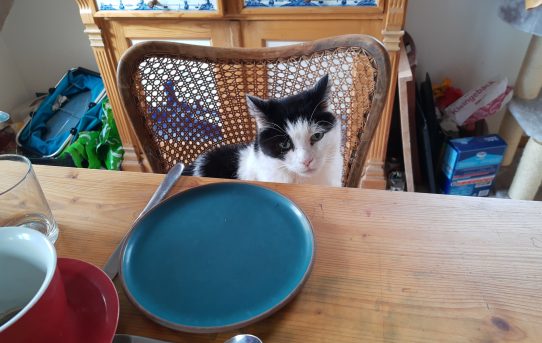 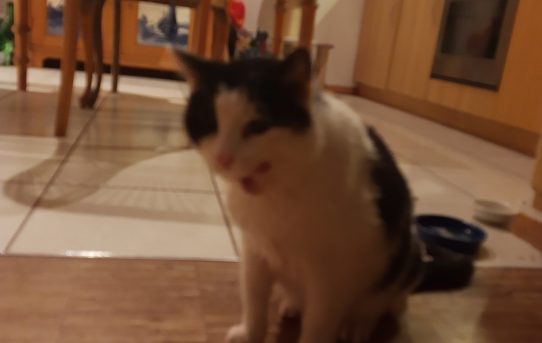 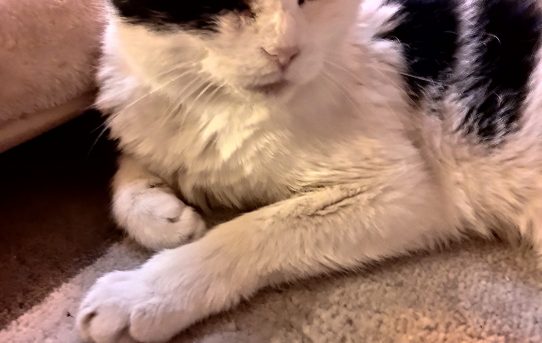 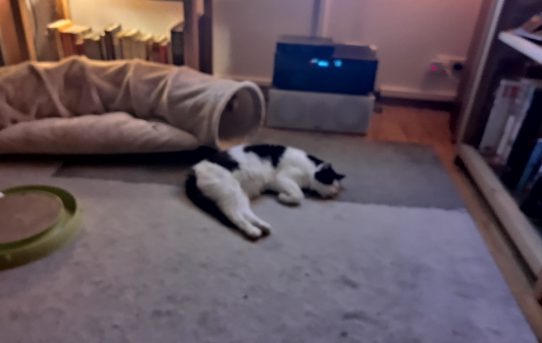